Home » How To Use Action Verbs In A Resume?
Education

How To Use Action Verbs In A Resume? 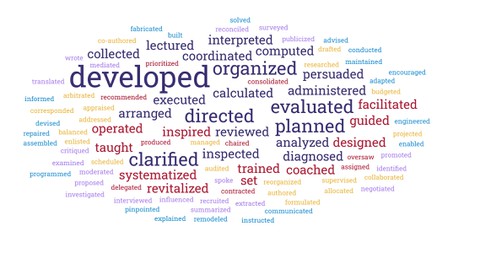 Normally, an action verb is used in business writing, especially used in a resume as they seem easier for the readers to understand and accordingly summarize the relevant data or information. Normally, people who are not aware of the proper format of the resume, always make mistakes in writing resumes.

What Do Action Verbs Actually Mean?

Action verbs mean doing, or it conveys doing something. In the resume, action verbs also show readers you accomplished something in the past jobs that you have done. It is very important for all of us to add strong verbs in resumes and it’s actually not a difficult task to do as it is found more suitable than any other form of writing.

There are different kinds of tests that are to be taken in order to determine and find out whether passive voice is being used in resume writing or not. These two kinds of tests are as followed:

Look for the helping verb, especially forms of the verb “to be”.

Some of the action verbs which are effective in resume writing and they are as followed:

The most important format or planning that one needs to follow while using an action word is to use the achieving language in spite of that doing language. This can be easily achieved with the help of a free online resume builder.

In case you are a part of the project or any initiative from the very beginning till the end and skip words like led and instead of that you can try words such as:

There are certain action verbs for when you increased efficiency, productivity, profit, sales, customer satisfaction, or revenue and they are as followed:

Normally we need to ignore the former one and utilise the latter one. It is more appreciated when an applicant writes his or her resume in active voice form rather than in a passive voice form.

Also when there is excessive use of passive phrases found in a resume, they are not appreciated. It is very often visualised that many intelligent job applicants commit such blunders while applying for jobs. The reason why they prefer passive phrases for job application CVs and resumes are:

There are many demerits of having a passive voice used in action verbs and they are as followed:

No more than 10 seconds is given to resumes if the reader is interested to continue reading your resume.  So it’s always preferable to grab the attention of your soon-to-be employee within those 10 seconds spans through an excellent resume format. When passive phrases are used many times, many employers stick their attention to the said thing only. They may find your CV or resume outdated as well.

As much as possible, you should avoid using generic words as it has the chance of creating confusion and ambiguity. In a real sense, the use of such fancy words won’t help you get a job. Success is a subjective concept and it differs from person to person. What you think success actually may not have the same for another person.

Passive voices are harmful to the quality of your writing which also conveys to hiring managers and recruiters that there is a lack of communication skills. On the other side, an active voice engages, convinces, and encourages readers to find out more.

Why Does The Action Verb Matter?

Action verbs are very much in use and it also supports the job applicants to stand out from their competitors. Somehow these action verbs also build the confidence and strength of the applicants in many ways and help the applicant to get a job. There are many advantages of an action verb but one main advantage of action words is the impact they have on.

Basically, a resume refers to a very precise or brief document which is submitted to an employer by an employee while applying for a job or any work. It’s not possible to include everything in the resume as some of these are to be kept for the interview rounds or group discussion round.

It is important to use shorter descriptions because of the space constraints. These descriptions are actually relatable to the readers because of the action words. Action words in a real sense show the employers in what manner you can be proved as the best candidate for this post or position. The vocabulary word book shall give the resume maker a brief idea regarding the good and appropriate action verbs which can be used in making resumes.

While describing skills and work experiences, stronger and unique words can be used to convey them to the employer. Even if you have selected many action words, you need to know the exact use of such words in the CVs or resumes. It can be beautifully written through bullet points in the work experience section and also you can make a summary of the responsibilities you have undertaken previously and other accomplishments received in your initial works and jobs.

ConclusionWe can also get many online resume and CV makers applications online but it is actually difficult and unpredictable whether these apps will make the use of action verbs in an active voice manner. That’s why even job applicants who are new to CVs and resume-making systems should refer to three-four free online resume builder and online resume maker sites in order to check on the format of the resume. Action verbs also speak a lot about your contributions in the field of work that you have done previously. That’s why action verbs are to be used carefully while making a CV or resume.

Mens Guayabera Shirts: Everything You Need To Know About These Crazy Popular Clothes

How Can Digital Tools Make Teachers Better at...

5 Significant Things You Need to Know About...

Where to Take Up Precast Concrete Training Course?

Why Assignment Help UK is the Best Solution...

Ways to Teach Kids the Importance of Education...

Is Paraphrasing Prevent you from Plagiarism?