Home » How to Check Whether the Application is in the Foreground or Not in Flutter?
Technology

How to Check Whether the Application is in the Foreground or Not in Flutter? 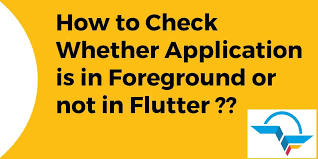 Often, you need to perform a separate operation for Foreground and background while developing a flutter mobile application. This calls for the need to ensure your mobile application is in the Foreground or not. For this, you are required to run coding or use a programming language. You can hire flutter developer, if you are a non-programmer or have less knowledge of the programming language. But, before you know if your application is in Foreground or Flutter, let’s first discuss what Flutter is and how it benefits mobile development.

Gartner assumes that IT services are the second-highest firm that spends a lot of money on development. There is a 6.1% of growth rate that results in about$39.2 a billion being spent. An expected increase in the investment in IT services adds business and technology consultants. It is because of reliance on external consultants as a business rush that reaches the peak in digital improvements. Due to this, many Australian companies invest in the latest technologies and hire Flutter developers in Australia to boost their app development quality and business productivity. Besides that, Forrester has measured a solid increase which has expanded by 7.2% and 6.7% respectively. It merges the total expenditure over these two areas is $29billion in 2022: $10 billion in IT consulting and $19 billion in outsourcing.

The codename ‘’Sky’’ was the first version of the Flutter and was introduced in 2015. Its first stable version of the framework, i.e., Flutter 1.0, was released at the Flutter Live event. It uses the programming language DART and incorporates Cupertino Widgets and Material design. It works naturally on every platform, even using a single codebase.

Following are the benefits one gets by using Flutter or while consulting a Flutter app development company.

How to Check Whether Application is in Foreground or not in Flutter?

Now that you have understood what Flutter is and how it benefits mobile applications, let’s move on to check whether the application is in the Foreground or not in a flutter. Below are the two steps you can follow to get the answer to your question. However, if you find any difficulty performing the programming language, you can ask a developer.

Step1: In your state <……….> you have to apply the WidgetsBindingObserver interface and observe the widget state changes. Implement the code mention below to get it done correctly-

To draw out the above mentioned code, you can also utilize the switch statement to run the code, making it nice and neat:

What is the need to focus on the App life cycle?

When you deal with a mobile app, there are some major concerns. For instance, if the app is running in the foreground or background. Hence, this can be easy to deal with flutter’s app lifecycle, such as detached, inactive, resume and paused. Meanwhile, if you are a non-programmer or do not have an idea to run code for the app life cycle, consult a developer to solve the complication more easily.

Detached – If an app is detached, one cannot see a view of the flutter engine.

Inactive – If an app is inactive, it does not receive the user input.

Paused– If an application is paused, it does not respond to the user and becomes invisible to them. Hence, it is necessary to observe that the app runs in the background.

Resume- When an application is resumed, the app becomes visible in the background and responds to the user.

Identifying your app’s lifecycle is a very easy approach. It is helpful when you use a mobile application and want to apply some special native app associated with development.

Now that you have learnt the meaning, benefits and how to check whether your application is in the foreground or flutter. If you are a programmer, then it is well and good; otherwise, take the help of an expert and resolve the complication quickly and easily.

4 Facts about Private Investigation That are Not Common

What Are The Power over Ethernet Standards?

Advantages of Per Diem Cards

What You Need to Know About iPad Repair

Free PDF to JPG conversion is available in...

Is it possible to purchase backlinks without suffering...

A Guide to Fix Netgear Nighthawk Login Not...